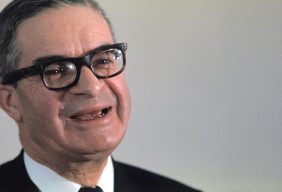 Jean Rey was a Belgian politician who served as the President of the European Commission. Born in 1902, he obtained a PHD in Law from the University of Liège in 1926. He initially embarked on a law career, serving as a Barrister at the Court of Appeal. He soon became, however, more actively involved in politics and in 1935 he joined the Liberal Party and was subsequently elected City Councillor of Liège. In 1939 he rose to obtain a seat in the Belgian Chamber of Representatives. He became increasingly active in his opposition of the Belgian policy of neutrality during the Second World War and after becoming a reserve officer he was captured by the Germans and taken to a Nazi concentration Camp where he spent the duration of the war. Following the conclusion of the war he returned to his political career, and in 1947 in strongly supported passing a bill which would see Belgium become a federal state. In 1949 he was appointed the Minister of Reconstruction and from 1954 to 1958 he served as the Minister of Economy. In this role he was involved in the development of the European Coal and Steel Community as well as the European Economic Community (EEC) and the European Atomic Energy Community (EAEC). During his time at the EEC he played an active part in Walter Hallstein’s merger treaty, which saw the three communities being combined to form the European Commission. Due to the lead role he eventually came to play in the merger, he was appointed President of the European Commission shortly after its formation. The Commission eventually increased to fourteen members and oversaw the completion of the Community’s Custom Unions in 1968. At the Summit of The Hague in 1969, whereby European leaders had met to reinvigorate European integration, Mr Rey played a key role and was an influential member in the eventual decision of admitting the United Kingdom to the Commission. In the final year of his presidency Mr Rey also won the support of European governments for his idea to allow the community their ‘own resources’, which meant the European Commission could gain revenues from custom duties and levies on agricultural products. Mr Rey continued his goal for an integrated Europe by leading the European Movement from 1974 to 1978 and in the following year he became a member of the first European Parliament. He continued to remain involved within politics until his death in 1983.