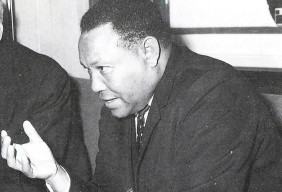 Ydnekatchew Tessema was a footballer and pioneer of modern sports organizations in Ethiopia. He is considered one of the country’s biggest sporting heroes. He played and coached Ethiopian clubs and teams, and founded the modern Ethiopian Sports office at age 22. Africa saw him as an ambassador of African sport who took pride in athletic advancements made by the continent, and in March 1988, he was made Posthumous Honorary President of the African Football Confederation. He led many Ethiopian sports delegations, including Ethiopia’s Olympic teams to Rome 1960, to Tokyo 1964 and to Mexico 1968. He was the leader of the struggle that expelled apartheid in South Africa from African Football in 1960, from the Olympics in 1971 and from FIFA in 1976.

Mr. Tessema was awarded the Gold Mercury Award for his success in developing sport in the country and contributing to African sport, evidenced through the endeavors of such international athletes as Abebe Bikila, Mamo Wolde and Mirutse Yifter. The awards ceremonies and conference of the Gold Mercury International Award took place in Ethiopia, and was the first time ever an award ceremony was conducted in Africa. Tessema’s exemplary attitude to sport was made apparent through his conviction that sport should be a shared ideal, irrespective of race, tribe, religion or politics affiliation. He viewed it as a way for us to overcome these differences.
adminYdnekatchew Tessema08.20.2015
read more