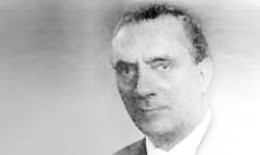 ADVISORY BOARD | The Hon Pietro Campilli

The Hon Pietro Campilli, born in Frascati in 1891 was an Italian politician. He studied accountancy at university and graduated with a degree in Economics and Commerce. He began his political career in 1920, when he was elected as a councillor to the Province of Rome, a position he held until 1923.  He continued his career by participating in the formation of the Christian Democratic Party and eventually went on to become a part of the National Council in 1944. Serving as a member of the Economic Committee of the National Council and also in the Economic Commission of the Constituent Assembly, The Hon Mr Campilli was then elected to the constituent assembly in the district of Lazio in 1946. In July 1946 he was appointed as the Minister of Foreign Trade before becoming the Ministry of Finance and Treasury in 1947.  From 1947 to 1949 The Hon Mr Campilli represented Italy in the Committee of European Economic Cooperation. His achievements in the economic sector were soon recognised and after a short period of directing numerous companies, he became the Chairman of the newly established European Investment Bank located in Luxembourg in 1958. His political and economic achievements culminated in him being appointed President of the National Council for Economics and Labour from 1959 to 1970.