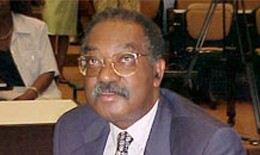 ADVISORY BOARD | Lopo do Nascimento

Former Prime Minister of The National Assembly of Angola

Lopo do Nascimento, born in 1942 is an Angolan politician. He served as a member of the Presidential Council in the pre-independent transitional government before becoming the Angolan Prime Minister in 1975. He served as Prime Minster until 1978 and became the Minister of Foreign Trade the following year. He continued to maintain an active political life holding the positions of Minister of Planning, Governor of Huila Province and MPLA Secretary General. During his political career he maintained a reputation for consistency and integrity. In 2008 he won a seat in the parliamentary elections, with the MPLA winning with an overwhelming majority in the National Assembly.

FORMER ADVISORY BOARD
adminLopo do Nascimento03.25.2019