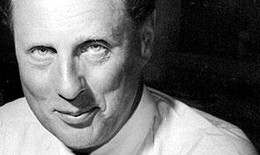 Gunnar Engellau was a Swedish businessman who served as the CEO of Volvo from 1956 to 1971 and  as its Chairman until 1978.  Born in 1907,  Engellau graduated from the Royal Institute in Technology before being employed by SJ in 1932.  He went on to become the Head of Planning at Motala in 1935 and then Purchasing and Sales Manager in 1937. He became the President of Swedish Flygmotor in 1943, before taking over as CEO of AB Volvo in 1956. When he began at Volvo, the company produced 31,000 cars a year and by the time he retired production had risen to 205,000. During his time as CEO he developed Volvo into a global business, introducing it to the US, which became pivotal to its success during this period. He also opened new factories and expanded the business creating more jobs. He retired in 1956, when his son-in-law took over as CEO. During his career he was on numerous Boards, including Volvo, Scandinavian Bank, AB Electrolux and the Swedish American Foundation.