Former President of the Republic of Venezuela

Luis Herrera Campins is a former Venezuelan politician who served as President of Venezuela between 1979 and 1984. Born in 1925, he showed an early interest in politics and journalism and studied Law at the Central University of Venezuela. After organising a student union demonstration against the dictatorship of Marcos Pérez Jiménez, he was imprisoned for four months and was deported. Upon his release he continued his studies, graduating with a Law degree in 1955 from Universidad Santiago de Compostela. Following the fall of Marcos Pérez Jiménez, Campins returned to Venezuela and in 1959 he was elected Deputy for the state of Lara, serving as Deputy/Senator for twenty years. In 1978, he was elected as President and inaugurated the following year. During his five year presidential term, Herrera continued the previous government’s economic policy of borrowing money on the world markets and eventually Venezuela came to owe the world banks more than 20 billion dollars. He also, however, developed a cultural development programme and reformed the existing educational programme. He also sought to develop Venezuela’s industry and agriculture sectors and combat corruption. His foreign policy stance was also strong, signing an agreement with Mexico in 1980 to provide Central American countries with oil. His presidential term ended in December 1983 and he died in 2007. 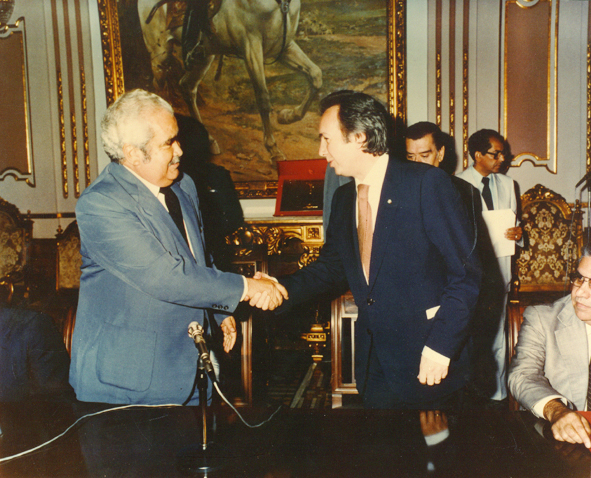