H.M. King Juan Carlos I of Spain was the recipient of the 1976 Gold Mercury International Peace Award for his role in Spain’s peaceful transition to democracy. He was born in Italy in 1938, following the exile of his grandfather King Alfonso XIII and other members of the Spanish royal family after the proclamation of the Second Spanish Republic in 1931. He returned to Spain in 1947 after his father asked General Franco that his son be allowed to receive a Spanish education. Following the completion of his studies, Juan Carlos joined the Spanish military and eventually graduated as a naval, army and air force officer. He then continued his education at Complutense University studying Law, International Political Economy and Public Finance. In a bid to prevent a descent into civil war in the event of his death, Franco named Juan Carlos as his successor and began preparing him to eventually take control of Spain. Following Franco’s death, Juan Carlos became King on the 27th November 1975. Following his coronation King Juan Carlos I of Spain began the process of introducing vast reforms and in his first speech to the Spanish parliament he expressed his desire to re-establish democracy in the country. These reforms invoked the anger of many groups who expected him to maintain an authoritarian state. He continued on his path towards democracy, however, and appointed Prime Minister Adolfo Suárez who furthered King Juan Carlos’s goal of a democratic nation. His liberal stance and efforts to restore parliamentary democracy in Spain were recognised by Gold Mercury International and he was formally presented with the Peace Award in 1976. 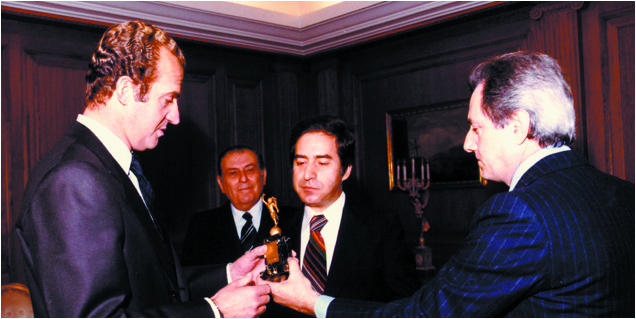