Former President of the Italian Republic

Giuseppe Saragat received the 1970 Gold Mercury International Peace Award during his final years as President of the Italian Republic. Mr Saragat was born in Turin, Italy and graduated from The University of Turin with a degree in Economics and Commerce. He joined the Socialist Party in 1922, later becoming the leader of the party. Following the establishment of the Fascist dictatorship in 1926 and Saragat’s vocally staunch opposition to it, he was exiled from 1926 and 1943. After returning to Italy in 1943, Mr Saragat became a member of the Italian Socialist Party (ISP) in 1944. Between 1945 and 1946 he served as Ambassador to France before becoming Chairman of the Constituent Assembly between 1946 and 1947. In 1947 Mr Saragat split with the ISP due to his concern over its close alliance with those supporting communism. He then founded the Italian Socialist Workers’ Party, which was later renamed the Italian Social Democratic Party. Mr Saragat served as Deputy Prime Minster between  1947-1949 and 1954-1957. In 1963 he became the Minister of Foreign Affairs before serving as Italy’s President from 1964 to 1971. Throughout his political life, Mr Saragat strived to ensure an anti-fascist Italian state whilst encouraging the continuing development of NATO and the common market, as well as strengthening Italy’s ties with the United States of America. 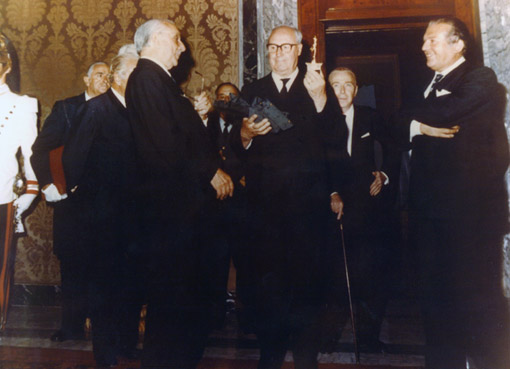