Camilo José Cela, 1st Marquis of Iria Flavia, was recongised with the Gold Mercury International Award for Culture & Media in 1986 for his significant literary contributions. He was born in 1916 in Spain and attended The University of Madrid, during which he spent a period of time in Franco’s army during the Spanish Civil War. He published his first novel, ‘La Familia de Pascual Duarte’ in 1942. This novel would later become one of his most well-known written works and its popularity was so great that post-war pieces of literature reflected Cela’s style and flair. The reason for its popularity was due Cela’s distinctive narrative style, known as tremendismo, which emphasised violence and graphic imagery through lengthy descriptive passages. Influenced by his travels through rural Spain and Latin America. Cela also published two travel books; ‘Viaje a la Alcarría’ and ‘Del Miño al Bidasoa.’ His second novel ‘La Colmena’, telling the story of post-war Madrid and featuring over 300 characters, achieved critical acclaim. Much of his work during this time, due to strict censorship laws in Franco’s Spain, was published in Latin America first. During this period his style continued to change and adapt as shown by ‘San Camilo, 1936’, which, when published in 1969, drew significant attention from critics who recognised a more avant garde and experimental novel than Cela’s past works. He soon founded the literary review agency Papeles de Son Armadans in 1956 and then in 1969 began to publish ‘Diccionario Secreto’; a dictionary of previously unprintable slang and taboo words and phrases. He was honoured several times in his career, including being appointed Royal Senator in the Constituent Cortes, a role which enabled him to influence the wording of the 1978 Spanish Constitution. Following his induction as a Gold Mercury Award recipient, he also won the 1989 Nobel Prize in Literature and was given the title First Marquis of Iria Flavia in 1996 by King Juan Carlos I. 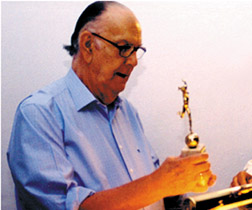