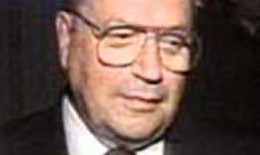 Uolevi Raade is the former Chairman of the Finnish Oil Refining company, Neste. Born in 1912, he graduated with degrees from the Helsinki University of Technology and Åbo Akademi. Whilst studying at the Helsinki University of Technology he founded the student flying club and during World War II he served as a fighter pilot. In 1954 he became the Director of the Ministry of Trade and Industry and it was in this position that he devised a strategy to receive war reparation payments stipulated by the Soviet Union. The following year he became the Managing Director of Neste and he succeeded in bringing in the first oil refinery shortly after his appointment. Mr Raade worked with Former President Urho Kekkonen to promote the project, rallying politicians and industries at home and abroad. In 1959 he became Chairman of the Board of Neste and until his retirement in 1979 he served as both Chairman and Managing Director of Neste. During the course of his career he was also actively involved in industrial federations and served as a member of the board of 37 corporations.