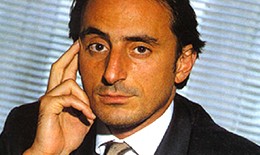 As an advisor to the European Union and the European Parliament under President Baron Crespo, De Santis has advised on key issues relating to European identity and the introduction of the Euro. As an internet entrepreneur, De Santis was one of the founding management team of OPODO, the European online travel portal founded by British Airways, Lufthansa, Air France, Iberia and Alitalia. Reaching over €1 billion euros in gross sales, OPODO was one of Europe’s most successful internet business launches. His consulting experience includes the development of strategic visioning projects for Canal+, British Airways, Iberdrola, Scottish Power, Government of South Africa, Google, Coca Cola, The European Union, CEU University and Prisa, amongst many others. De Santis sits on the boards of Lyris, the U.S. marketing technology company and GVN (The Global Virus Network), the network of global virologists looking to eradicate the world’s biggest viral threats.

With a family background in the filmed entertainment business, De Santis attended the London Film School, the oldest-established independent international school of film technique in the world in order to further his knowledge in the field of film production and distribution. His grandfather Antonio Cuadra Belmonte was a bullfighter.

Nicolas is also part of The Duke of York’s Entrepreneurs Network. Its mission is supporting the economic success of, and the creation of skilled jobs in, the United Kingdom. The network has chosen to concentrate its efforts on three core areas: SMEs and Entrepreneurs, Science and Engineering & Education and Skills.