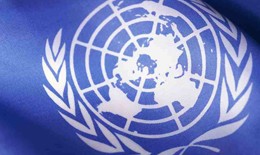 Born in Cameroon, Michel Doo Kingue (1934-2005), began a career in politics in 1961 when he was appointed to the position of Permanent Secretary in the Ministry of Education. During his time at the Ministry of Education, he assisted in the planning and creation of the country’s first university in Yaounde. In 1963 he was appointed to the position of Senior Advisor for African Affairs at UNESCO, a position he held until 1969. In 1969 Doo Kingue became UNESCO’s Director of International Organisations and Programs, where he was responsible for ensuring cooperation between UNESCO and intergovernmental and nongovernmental organisations. In 1971 he accepted a position at the UN as Assistant Secretary General and became Assistant Administrator for the UN Development Program. In 1983 he was made UN Under-Secretary General and also became the Executive Director of the UN Institute for Training and Research. In 1991 he was a candidate for the post of UN Secretary General before retiring the following year. Doo Kingue also issued several publications over the course of his career.