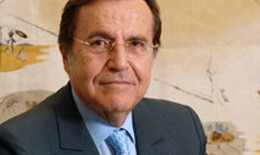 Founder and Chairman of Excem Group

Mauricio Hatchwell Toledano was born in Morocco. He was the founder and Chairman of Excem Group and the driving force behind a number of cultural initiatives that include the International Jewish Committee Sepharad 1992 and the Fundación Amigos de Sefarad of Spain. In 1992, to commemorate the 500th anniversary of the expulsion of Jewish  people from Spain,  Hatchwell published 500 copies of the Alba Bible; the medieval Spanish translation of the Tanakh. The book, later given to Juan Carlos I of Spain, is prized for its contributions to biblical and Jewish cultural history. In addition to other special acknowledgements Hatchwell received the Prince of Asturias Concord Prize in 1990, the Jerusalem 3000 award in 1995 and the Commander of the Spanish National Merit in 1999 . Hatchwell was an active member of cultural, academic, business and social circles in Spain, France, Israel, China and the United States. He also served as a member of several academic institution’s boards during his career.