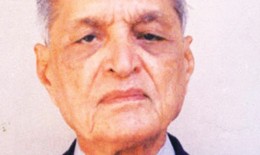 ADVISORY BOARD | M. A. Zuberi

M. A. Zuberi was born in Merehra, India in 1920. He was an innovator in the fields of economic and financial journalism in Pakistan, having entered the profession in 1945. He served as Senior Assistant Editor at Dawn before launching the Evening Star. He also later launched the Business Recorder, which became the first business daily publication of the Muslim World. He served as a founding member and President of the Council of Pakistan Newspaper Editors as well as representing Pakistan at several international forums such as the U.N, The World Bank and International Monetary Fund meetings. His contribution to journalism saw him receive several high profile awards, most notably, the Sitara-i-Imtiaz.