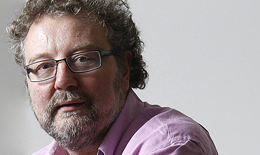 John Carlin is a journalist and author, who deals with both sports and politics. His book Playing the Enemy: Nelson Mandela and the Game that Made a Nation, about former South African president Nelson Mandela, is the basis for the 2009 film Invictus, directed by Clint Eastwood and starring Matt Damon and Morgan Freeman as Mandela. His 1997 article titled “A Farewell to Arms” for Wired magazine about a cyber warfare attack was originally intended to form the basis of a 1999 film, WW3.com. When this project stalled, its script was rewritten into the 2007 film, Live Free or Die Hard (Die Hard 4.0) starring Bruce Willis.

John Carlin  began his journalism career at the Buenos Aires Herald in 1981, writing about film, football and politics. In 1982, he began a six-year stint in Mexico and Central America working for, among others, The Times and Sunday Times, the Toronto Star, BBC, CBC, and ABC (US) before joining the staff of The Independent at the newspaper’s launch in 1986. Carlin was The Independent’s South Africa bureau chief from 1989–1995. In 1993, Carlin wrote and presented a BBC documentary on the South African Third Force, his first television work.

From 1995–1998 he was the United States bureau chief for The Independent on Sunday. In 1998, Carlin joined El País, one of the world’s leading Spanish-language newspapers, where he still works as a senior international writer, formerly based in Barcelona he has now moved to London.

An article by Carlin was the basis for the script of the 2000 Channel 4 documentary Maradona – Kicking the Habit. Carlin won the 2000 El País Ortega y Gasset Award for journalism, for an article in Spanish newspaper El País. In 2004 he won the British Press Awards”Food and Drink Writer of the Year” prize.

His work for El País has been strongly critical of Brexit. He had previously written in El Pais that in the event of a vote to leave the EU, he would feel ashamed that he had been born in England and would consider taking Spanish nationality, or (if it should become possible) Scottish nationality. He regarded the very fact that the referendum had been held at all, as an insult to Europeans.

Much of Carlin’s career has dealt with the politics of South Africa. Carlin was writer and interviewer for the 1999 episode “The Long Walk of Nelson Mandela” of the American PBS series Frontline. It was also broadcast as “The First Accused” in South Africa by the SABC. This had led to a relationship with the former South African president, Nelson Mandela. In a 1998 interview, Mandela said of Carlin’s journalism: “What you wrote and the way in which you carried out your task in this country was absolutely magnificent…it was absolutely inspiring. You have been very courageous, saying things which many journalists would never say.” Mandela wrote the foreword to Carlin’s 2004 Spanish language book, Heroica Tierra Cruel, about Africa.

Carlin has written for, among others, the Financial Times, the New York Times, Wall Street Journal, The Observer, the Guardian, the Daily Mail, the New Statesman, Wired and New Republic. In August 2011, Carlin collaborated with tennis superstar Rafael Nadal on the latter’s autobiography Rafa. John Carlin collaborates with Gold Mercury on the BRAND EU initiative.