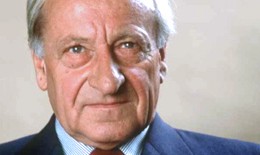 Hermann Gmeiner was born in Austria in 1919 and it was his experience of war, first as a soldier in Russia and then as a child welfare worker after the end of the Second World War, that spurred him to implement his idea for SOS Children’s Villages. Dr Gmeiner concluded that welfare assistance would not be effective for war orphans and homeless children unless they were able to grow up in a home of their own. In 1949 Dr Gmeiner established the SOS Children’s Village Association and set about developing plans for the first SOS Children’s Village which would be located in Imst. The child care concept implemented in villages was based on the idea of a mother, a house, brothers and sisters and a village all present in order to offer stability and normality to children. His success, in the following years, allowed him to set up further villages in Austria as well as villages in other European countries. Later, SOS Children’s Villages were also constructed outside of Europe and by 1985 there were 233 SOS Children’s Villages in 85 countries. His influence and commitment to improving the lives of children led him to being recognised with numerous awards and a Nobel Peace Prize nomination before his death in 1986.