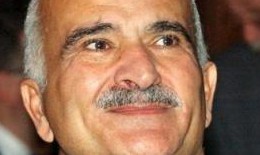 Prince of the Hashemite Kingdom of Jordan

His Royal Highness Prince El Hassan Bin Talal has founded and is actively involved in a number of Jordanian and international institutes and committees. He established and now directs the Islamic Scientific Academy; the Tri-annual Conferences on the History and Archaeology of Jordan; the Hashemite Aid and Relief Agency; the Centre for Educational Development; the Institute for Diplomacy; and the Al al-Bait University in Mafraq. At the 36th Session of the United Nations in 1981, Prince Hassan proposed the establishment of the New International Humanitarian Order, which led to him being asked by the U.N Secretary-General, to found and co-chair the Independent Commission on International Humanitarian Issues (ICIHI). In 2002, Prince Hassan founded the International Cultures Foundation and from this The Parliament of Cultures was formed in 2004. In 2003, Prince Hassan launched Partners in Humanity as a joint initiative with John Marks from Search for Common Ground (SFCG). Decorated by over twenty nations, Prince Hassan is the holder of the Order of Al Hussein bin Ali, Jordan’s highest decoration.