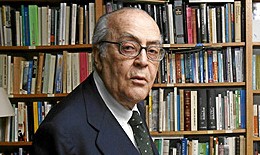 Leopoldo Calvo Sotelo was a Spanish politician and former Prime Minister. He graduated as a civil engineer and went on to hold prominent positions in both public and private enterprises before becoming the President of RENFE in 1967. In 1971 Calvo Sotelo was elected as Deputy Solicitor of Franco’s Cortes, representing industrialists in the Union of Chemical Industries. With the end of Franco’s dictatorship, he became more actively involved in Spanish politics. He was appointed Minister of Commerce in the first government of the monarchy and he encouraged the destruction of Franco’s ideology. From 1977 to 1980 he served as Minister for Relations of the European Economic Community and later as Second Vice President in Charge of Economic Affairs. Following Prime Minister Suárez’s resignation in 1981,  Calvo Sotelo was appointed President before being voted in as Prime Minister by congress on the 25th February. During his time as Prime Minister he promoted a more moderate wage agreement between employers and unions and strongly advocated Spain’s entry to NATO.  After losing the election in 1982 he was succeeded by Felipe González. In 2002 King Juan Carlos I of Spain bestowed the position of Marquis of the Ría of Ribadeo on Calvo Sotelo.