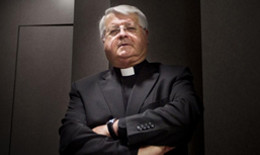 Founder of the Lezama Foundation

Father Luis de Lezama is a Basque Catholic priest, and president of Grupo Lezama: one of the world’s most successful high-end restaurant chains, with 20 in Spain plus two other restaurants in Washington, DC, and Seattle. In 1962 he joined the priesthood, starting out in a small town 63 kilometers from Madrid. He soon immersed himself in working with the poor. In 1974, when he had some 20 youngsters in his care and didn’t know how to sustain them, someone suggested he open a restaurant. In 1974, Father Lezama rented a house in front of the Royal Palace in Madrid once owned by the captain of the Alabarderos, or Palace Guards, and created the first Taberna del Alabardero, a restaurant. He had no restaurant experience. What he wanted to do was help young people with social problems. Lezama employed orphans to work there and learn the restaurant and hospitality trade. The proceeds went to his foundation to support poor children. Conceived to provide shelter, employment, and skill training to troubled and homeless youth, the restaurant quickly became a popular dining destination. Now with almost 20 restaurants across Spain and stateside (in Seattle and DC), as well as several hotel and restaurant schools, Lezama has proven that you can do well by doing good. On his idea for hospitality skill training for juveniles to keep them out of trouble, he says: “Don’t give them fish, teach them how to fish” (a quote attributed to Jesus Christ, but also to Chinese philosophers including Confucius). Many of their restaurant employees were or are in trouble with the law, but work in Grupo Lezama is geared toward the youths’ rehabilitation. Lezama recalls a time that a young waiter was caught stealing from one of their restaurants. Instead of reporting it to the police, Lezama had the boy assigned to the kitchen, where many people could keep an eye on him.

Lezama has been a journalist, a writer, restorer, businessman and a practical priest. He now practises in the Parish of Santa Maria Blanca in Montecarmelo, Madrid. The Lezama FOUNDATION runs a general school in his parish, with 1,600 students aged one to 16 and have introduced a revolutionary education system (EBI) developed with Microsoft to advance the way children learn for the future. Apart from this school, the Culinary Institute of Spain, which he opened in 1993 in Seville, will soon be expanding to Miami and other parts of the United States. It has an online university course with 6,000 students.

Father Lezama has certainly a different perspective on how to be a leading businessman; combining business with purpose to achieve social outcomes, and managing a group that generates over 22 million euros per annum. One of the few hugely profitable restaurant businesses in the world where no dividends are given out, and all earnings are funneled to a foundation for the rehabilitation of troubled youth. Some of the Lezama Group’s original students, now married and with families, are working with the company. “I’ve got a lot of grandchildren,” Lezama says. The now legendary Lezama restaurants attract many loyal and prominent clients. Grupo Lezama served meals to the late Pope John Paul II. At Café de Oriente, a photo of Lezama and the restaurant staff with Pope Benedict XVI, taken during the pontiff’s visit for World Youth Day last August, is displayed prominently.