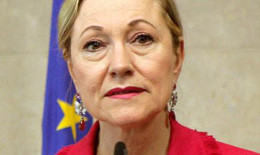 Benita Ferrero-Waldner is a former European Union Commissioner for Trade and European Neighbourhood Policy and for External Relations in the European Union. Between 2000 and 2004, she was the Foreign Affairs Federal Minister of the Republic of Austria and also the Vice-President of the Organisation for Security and Cooperation in Europe (OSCE) in 2000, as well as the Republic of Austria’s Secretary of State for Foreign Affairs and Development Cooperation (Minister of the Cabinet between 1995 and 2000).She was granted the Grand Gold Medal with Ribbon for Services to the Republic of Austria in 2010. In the private sector, she has held positions of responsibility in Gerns and Gahler and P. Kaufmann Inc. New York. She is a member of the Board of Directors of many companies, such as Alpine. Mrs Ferrero Waldner has a Doctorate in Law from the University of Salzburg and an Honorary Doctorate from the Lebanese American University in Beirut.