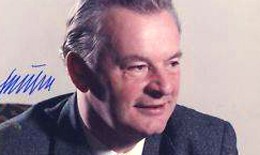 Anton Jaumann was a German CSU politician who served as the Bavarian Minister for Economy and Transport. Born in 1927 he studied Theology, Economics and Law before founding and leading his own law firm in Munich in 1957. During this time he also served as the CEO of the National Association of the Bavarian Capital and Foreign Trade. He was a member of Bavarian parliament from 1958 until 1990. In 1966 he became the State Secretary in the Ministry of Finance before eventually serving as the Bavarian State Minister of Economy and Transport until 1988. During his term as Minister of Economy and Transport he made several key decisions and was an outspoken critic of the planning approval process and construction of the Franz Josef Strauss Airport.