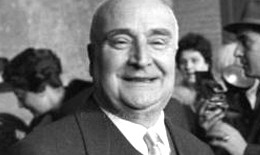 Angelo Rizzoli was an Italian publisher and entrepreneur who founded Rizzoli Editore. Born in 1889 in Milan, he was orphaned at a young age yet managed to succeed in becoming an apprentice in the printing trade during his youth. In 1927 he founded A. Rizzoli and Co, a press company which began with the acquisition of the magazine Novella, and later, several other national magazines. In 1949 the company began to publish books and in 1952 they changed the name to Rizzoli Editore. In 1954  Rizzoli purchased Cartiera di Lama di Reno which served as a basis for his subsequent publishing empire. In 1960 the operations moved and he became one of the first producers of daily newspapers within the newly established nation of Italy. He was also actively involved in film production, producing La Dolce Vita and 81/2. In 1964 he opened the Rizzoli International Bookstore in New York.  Rizzoli died in 1970, but the company continues today as RCS Media Group operating daily and producing newspapers, magazines, books, radio broadcasts and television programmes.